I created this layout to honor my mother who would have turned 99 years old a few weeks ago. This sweet photo is her Senior portrait taken in 1936. 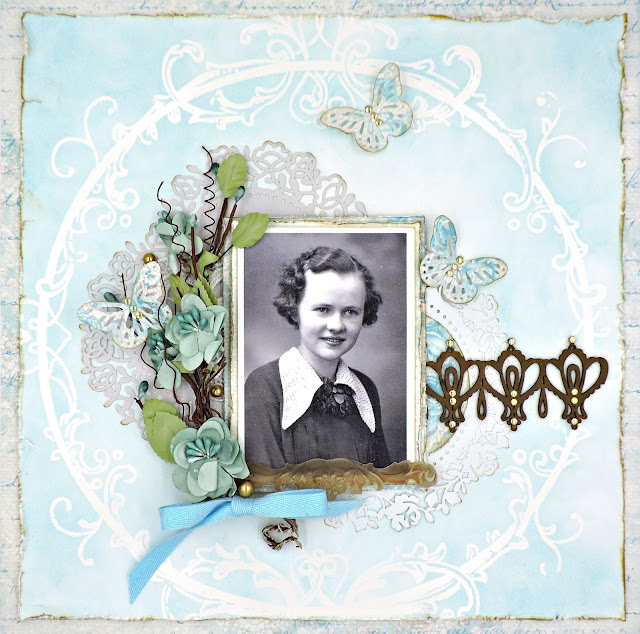 Among the goodies included in the Delicate Kit from Swirlydoos is a Heidi Swapp Invisible: a heavy piece of white cardstock with a clear embossed design that acts as a resist, showing through when the page is inked. I decided to keep this one simple and colored it all over with Ranger Distress Ink in Tumbled Glass. Next, I trimmed it by 1/4 inch on each side and distressed and inked it all around.
The featured collection this month is Gossamer Blue by Lemoncraft: papers and flair and trims, full of beautiful shades of blues and creams and coppery browns. I chose the #6 page and because I wanted to use all of it, I cut a 10 inch square from the center and put it aside. The outer part was adhered to an 11 inch square of chipboard to keep the page sturdy and then covered with the colored Invisible paper.
The doilies at the bottom are from a set that I've owned for several years: Eau de Nil from Docraft's  Capsule collection. The top one is a heart in a light grey; the bottom is a circle in an even lighter grey. I cut a circle from the paper that I had  put aside, distressed and inked it and adhered it to the center of the bottom doily.
The photo was matted with more of the paper, again distressed and inked; I added a bit of chipboard between each layer to give it some dimension.
I snipped a piece of the Lace Border 3 chipboard from Creative Embellishments and colored it with the same Ranger Distress Ink in Walnut Stain that I used to ink all of my edges, decorated it with Mark Richards Nailhead stickers and placed it next to my photo. 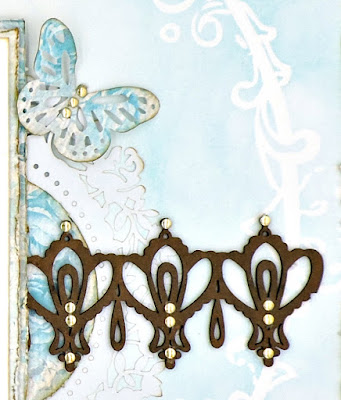 I've been using Ranger Ice Resin and IOD Moulds from Prima to make a pile of clear resin embellishments. The piece at the bottom is from the Baroque 5 Mould, colored with Prima Artisan Powder in La Chapaliere.

The vine from 49 and Market (also included in the Delicate Kit) sort of hides a bit of lace that I placed along the side of the photo; it does peek out in the close-up. 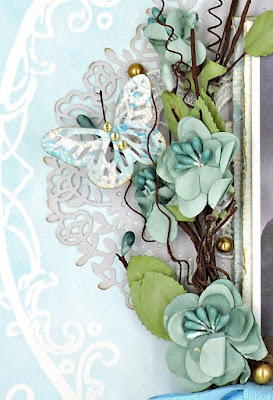 A few finishing touches: butterflies from my Martha Stewart punch and trimmed with more of the Nailheads, a few Prima Memory Hardware pearls and a bow made from the package of Lemoncraft trims.

Posted by Peggy Giovanetti at 3:16 PM