I love making mini albums. Not only do they hold a lot of photos, but they let me get creative with pockets and flaps and a variety of colors and patterns.
My Daughter-In-Law shared some beautiful pictures that she took last summer in a sunflower field and my first thought was that the Graphic 45’s French Country collection that I’ve been hoarding for a few years would be perfect.

For a base, I cut two 8 ½” x 11” sheets of black cardstock down to 7 ¼” x 11” and taped them together ½” from the edges, then trimmed the paper to create a length of 17”. I scored the resulting piece at 5” and 5 ½” and 10 ½” and 11” where the paper is taped together. One more scoring, at 16” created a small 1” flap at the end.
The album itself is made up of a lot of layers of pattern paper with black cardstock matting with chipboard in between to give it all a bit of dimension. To avoid messing up, I built up each page on a base of 7” x 5” chipboard and didn’t adhere them to the album until I had finished them all.
Before adding the pages, I glued on spines made with ½” lengths of paper adhered to chipboard. 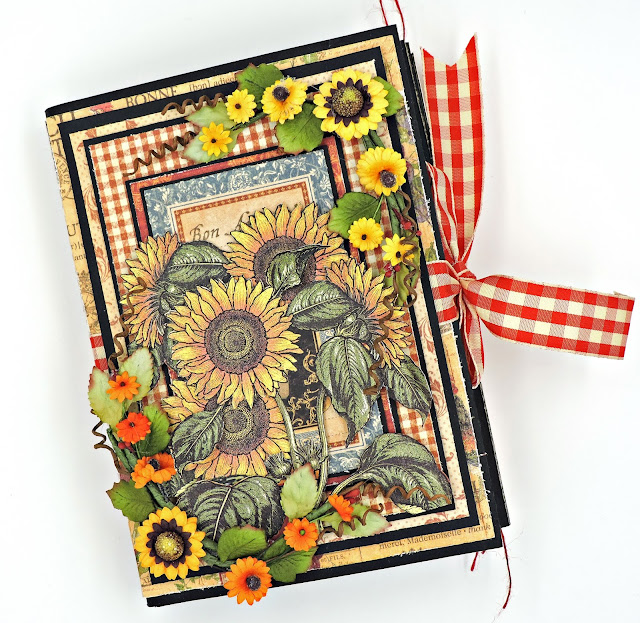 The cover was finished last to avoid all the wear and tear that building the inside would cause. After gluing down the bottom layer, I ran a length of ribbon across the middle and around the back to form a closure for my mini album.  I’ve used varied patterns for my layers, with a small cut apart on top. Next, I used a few fussy cut sunflowers, topped with my favorite Prima vines. 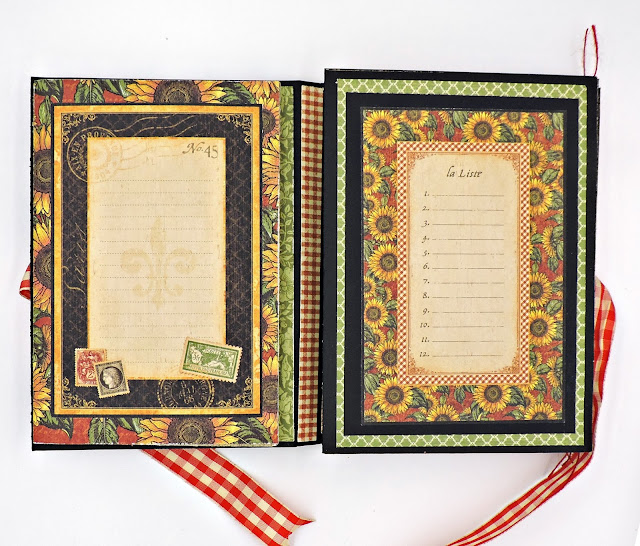 The front opens to reveal two large cut aparts that can be used for journaling or to hold several more photos. 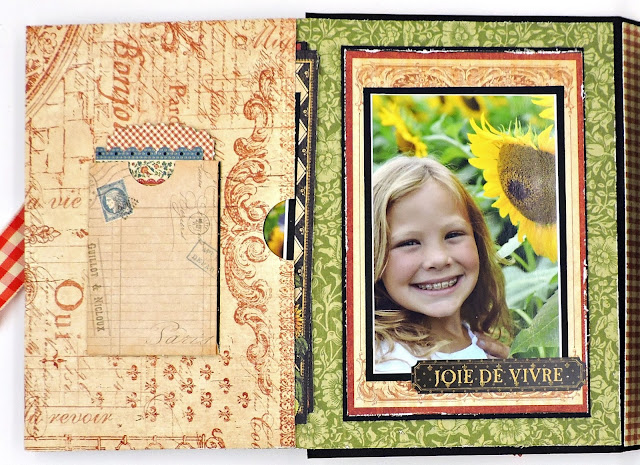 The base paper was cut to a width of 9 ¾” and scored at 4 ¾” to form a flap. I cut another piece to 7 ½” x 4 ¾” and scored it at ¼” at the bottom and the sides. After using my circle punch on the top, I fastened my pocket to the inner flap with Scor Tape. One of the larger cut aparts makes a perfect background for my photo. 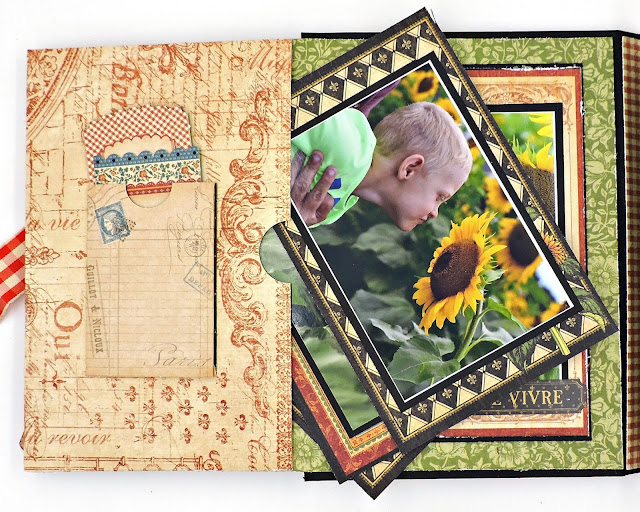 I matted several more photos with large cut aparts and tucked them into the pocket. Several pieces from the Tags and Pockets were adhered to the front to create another spot for journaling. 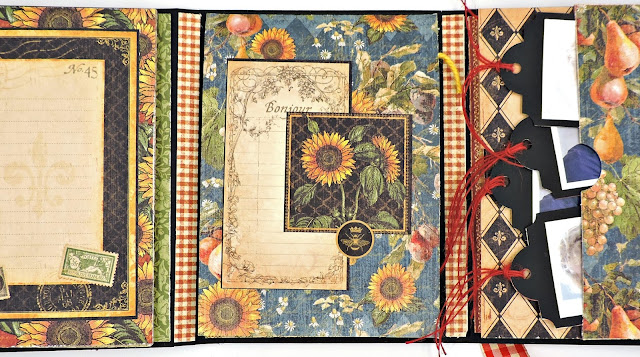 Next, I cut two 10 ⅜” x 5” strips and scored each at 6 ⅞”. I adhered the short ends to the base, creating flaps on the top and bottom.

The top flap opens to reveal a place for a photo and a pocket that I created by cutting a piece to 5 ½” x 4 ¼” and scoring at ¼” on the bottom and sides and gluing on another strip on top for a bit of contrast. I added a length of lace on the bottom of the strip to hide the seam.
I die cut several pieces of black cardstock and several pieces of scraps and glued them together to make tags to hold small photos. I finished them off with bits of yellow jute.

The bottom flap opens to reveal another large photo and another pocket to hold a couple of large images. 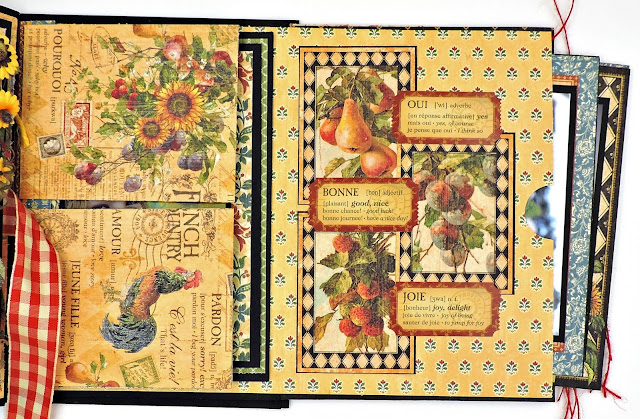 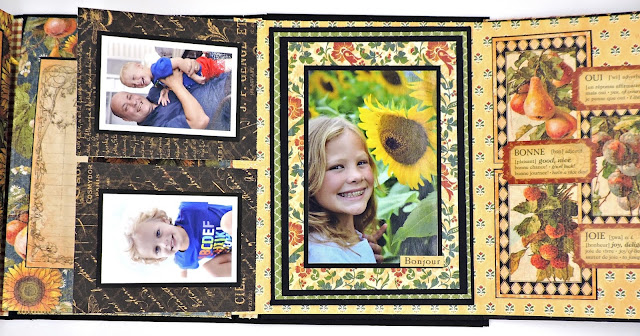 The base in the center was made with a piece cut to 10 ¾” and scored at ¾” and 5 ¾”. The longer piece on the right was used as the base of the pocket; the shorter piece was cut in the middle to the score line to form two flaps to hold more small photos. 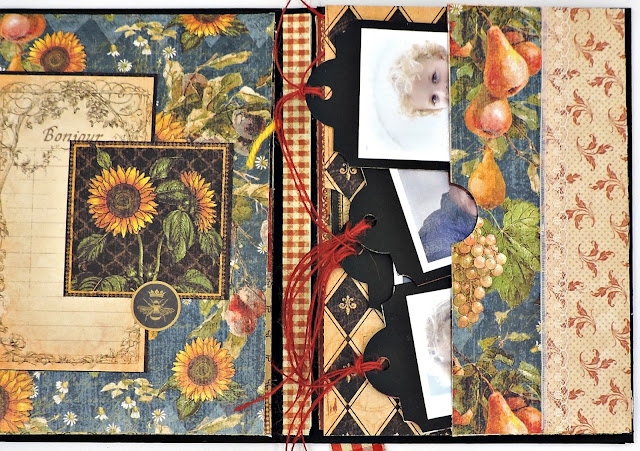 Another pocket, holding some more tags, was placed on the last flap which is another pocket made like the one on the front page. 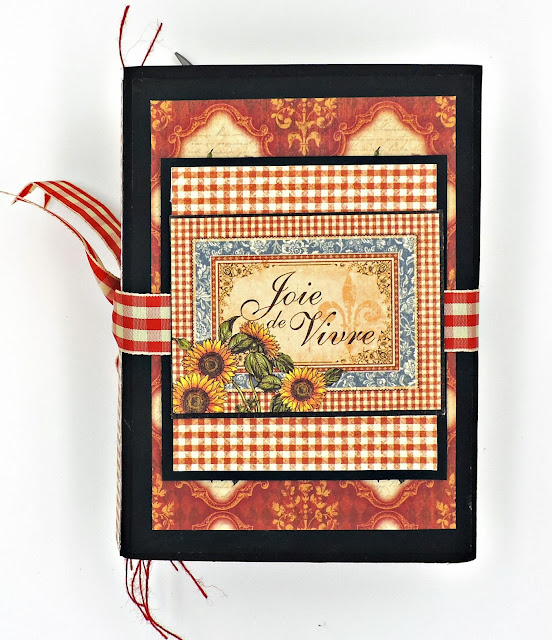 The back is flat, with a couple of layers to hold the ribbon down. The small cut apart pretty much describes the photos inside, doesn’t it?

Posted by Peggy Giovanetti at 5:40 PM