When I opened my September Très Jolie package and saw the Mixed Media kit, with a canvas board, several packages of metals from Prima and an assortment of mediums (including rust reagent), I knew that I wanted to roll up my sleeves and dig in immediately.
This is what I came up with. 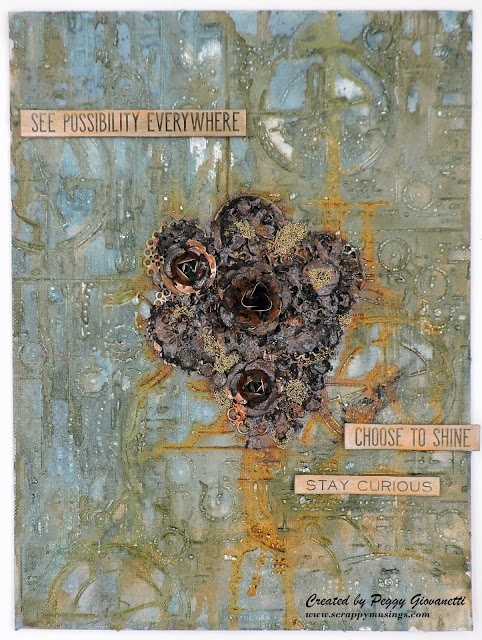 Lots and lots of layers here: layers of texture, layers of color and layers of details…
I started by applying crackle paste through the stencil that came in the kit to cover my canvas board with a random pattern of clocks and gears and other textures.

Once the paste had dried, I took out the Lindy’s Squirts. I had never used these before, so this was pretty experimental.
I placed a few drops of the Hockey Puck Black to the top of the page, misted it with water and put the canvas in an upright position to allow the ink to run down the page as I dried it with my heat tool. I repeated this step several times, turning the canvas upside down and sideways occasionally to cover the board. (I know that this ink is titled “Hockey Puck Black”, but like all Lindy’s inks, this is two-toned. I really like the green hue that comes out as the ink is diluted.)
Next, I applied the Beaver Tail Brown in the same way. This resulted in shades ranging from flat brown to a rust hue.
The misting left some of the canvas with a water color effect which I left as is to create a few contrasting bright spots.

Kim packed three packages of Prima Mechanicals in this kit and I used most of the contents to create my center, adhering each piece with gel medium. This gave me a little bit of time to rearrange the pieces while leaving a very heavy bond – so important when using metal embellishments.

I painted all of the metals with the Red Bronze paint. While this was drying, I mixed a small bit of the Hockey Puck Black Squirt with the Snow Cap paint and used it to highlight some of the edges. Once this was dried, I used gel medium to trim my arrangement with some of the Microspheres. I put this aside to set.

And now for the magic! I painted small bits of gel medium here and there and sprinkled them with Rust Effect Powder. Once this was dry, I applied the Rust Reagent to each spot, turning the canvas upright so some of this would run down the surface. This was allowed to dry overnight for the reagent to take effect.

Meanwhile, I remembered that I had some large Tim Holtz quotes stashed away. I selected a few that I thought would match my piece. I covered them with Metallic Wax in Bronze Age and then highlighted them with the Firebird Wax.

Before attaching the quote pieces, I used a fan brush to lightly dry brush areas of the canvas with the Snow Cap paint.

And that’s it! An experiment that turned out well; I just love when that happens…