In my last post, I told a story about the album that my father kept while serving in World War II. Most of the photos were of family and friends “back home”, but he also included a lot from his life in the Army Air Force: various bases, leisure time, planes that came back damaged and his fellow crew members, on the B-17 “Esky”. There is a series of single photos of each of the members, dressed in flying gear, across several pages, with names and ranks inked in. Dad inserted his own photo in this group; he captioned this “My Hero”, hence the title that I chose for my layout. 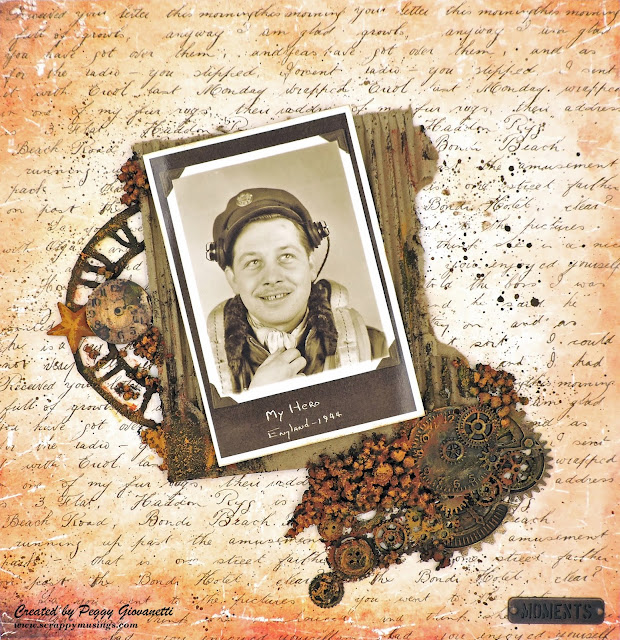 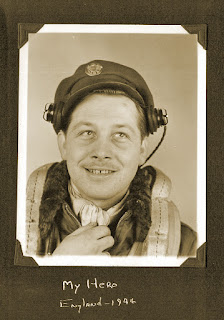 I decided to print out my photo “as is”, with the photo corners and the caption in my father’s handwriting included. I did change the color to a sepia shade to blend in with the colors of the layout.

The Lemon Craft Grow Old with Me collection that was included in the May Très Jolie kit is filled with pinks and peaches and images of flowers and laces, with just enough vintage rustic elements to make it perfect for feminine layouts. I selected the “B” side of sheet 06 for my layout and let myself be guided by the colors and design…
I knew that my final layout would be heavy with metals and mediums, so after coating both sides of the paper with clear gesso, I used Scor Tape to adhere it to a heavy piece of packaging so that it would end up with a minimum of warping.
I took another piece of that heavy packaging, cut it to fit as matting, and ripped it down one side. Before I taped it to the page, I tore off most of the top layer to expose the corrugate underneath.
And now the fun began… I used gel medium to adhere layers of metals and buttons under the matting and allowed it to set. I placed the die cut half left over from a previous layout down the side and embellished it with a clock face and star from my stash.
I used two sizes of Art Stones to add texture and interest here and there around the layout, starting with the larger ones and allowing them to set before adding the smaller stones.
Next, I went over all of the metals and stones and some of the corrugate with Rust Effect Paste, starting with a heavy application of the darkest color, and dry brushing the succeeding layers to allow all of the varied hues to come through. 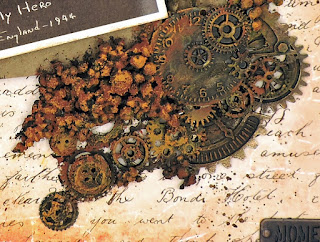 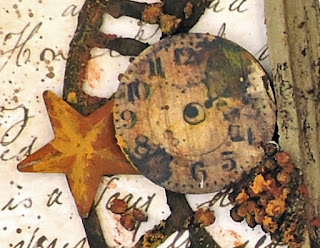 Before adding my photo, I watered down a little of the dark paste and used a fan brush to create splatters all around the page.
As a finishing touch, I added a metal band to the bottom corner…